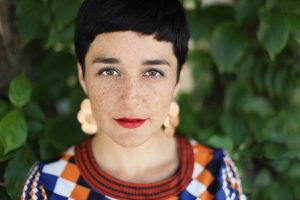 We are thrilled to welcome multitalented singer, songwriter and instrumentalist CAMILA MEZA to the Sony Music Masterworks family! Stay tuned for new music at the start of 2019.  The talented musician now gears up for the next chapter in her already impressive career with her major label debut.

Arriving to the New York jazz scene in 2009 from her native Santiago, Chile, Camila Meza immediately made a name for herself, bringing what The New York Times’ Nate Chinen described as, “an appealing combination of lightness and depth to all the material, singing in a bright, clear voice against the agile stir of a first-­rate band. Her improvising, on electric or acoustic guitar, is serious business…”  Inspired by jazz, South American music and American popular songs across decade and genre, she has delighted audiences worldwide with her rare combination of talents: assured and beautiful singing; highly advanced guitar (both self-accompaniment and blistering solo work); and vividly colorful, melodic songwriting that reveals complex layers with every listen.

Making her album debut in 2007 with the release of Skylark, Meza has since released three full-length albums: Retrato (2009), Prisma (2013) and, most recently, Traces (2016), which won two Independent Music Awards for Best Adult Contemporary Album and Best Latin Song (“Para Volar”), and established her as a Rising Star in both guitar and female vocal categories in the esteemed DownBeat Critics Poll. This past April, Meza was tapped by Pat Metheny to perform and act as musical director for his 2018 NEA Jazz Masters induction ceremony, which took place at The Kennedy Center in Washington D.C.  Meza currently leads her ensemble The Nectar Orchestra, a collaboration with bassist/arranger Noam Wiesenberg, which will be featured on her new Sony Masterworks release entitled Ambar in 2019.  She also performs as a member of Ryan Keberle’s Catharsis and Fabian Almazan’s Rhizome, among other top jazz ensembles.

“Music is my driving force, the expression I feel the most resemblant of our essence as human beings,” says Camila Meza.  “I’ve found my deepest moments of connection, reflection and joy through music and I hope to bring the same to the ones who listen.”

“Camila Meza is an incredibly talented musician at the new frontier of global music,” says Mark Cavell, Senior Vice-President, Sony Music Masterworks.  “With her vast musical knowledge and talent she transcends boundaries both geographically and musically, and we are thrilled to have her join us on the label.”