Latest Release : A Gathering Of Friends 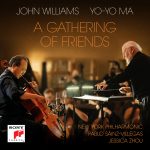 Congratulations to Yo-Yo Ma and Emanuel Ax for their 2022 Grammy win!

Yo-Yo Ma’s multi-faceted career is testament to his continual search for new ways to communicate with audiences, and to his personal desire for artistic growth and renewal. Whether performing new or familiar works from the cello repertoire, coming together with colleagues for chamber music or exploring cultures and musical forms outside the Western classical tradition, Mr. Ma strives to find connections that stimulate the imagination.

One of Mr. Ma’s goals is the exploration of music as a means of communication and as a vehicle for the migrations of ideas across a range of cultures throughout the world. Expanding upon this interest, in 1998, Mr. Ma established Silkroad, a nonprofit organization that seeks to create meaningful change at the intersections of the arts, education, and business.  Under his artistic direction, Silkroad presents performances by the acclaimed Silk Road Ensemble and develops new music, cultural partnerships, education programs, and cross-disciplinary collaborations. More than 80 new musical and multimedia works have been commissioned for the Silk Road Ensemble from composers and arrangers around the world. Silkroad’s ongoing affiliation with Harvard University has made it possible to develop programs such as the Arts and Passion-Driven Learning Institute for educators and teaching artists, held in collaboration with the Harvard Graduate School of Education, and a new Cultural Entrepreneurship initiative in partnership with Harvard Business School.

As the Chicago Symphony Orchestra’s Judson and Joyce Green Creative Consultant, Mr. Ma is partnering with Maestro Riccardo Muti to provide collaborative musical leadership and guidance on innovative program development for The Negaunee Music Institute of the Chicago Symphony Orchestra, and for Chicago Symphony artistic initiatives. Mr. Ma’s work focuses on the transformative power music can have in individuals’ lives, and on increasing the number and variety of opportunities audiences have to experience music in their communities.  In March 2016, he was appointed Artistic Advisor at Large to the John F. Kennedy Center for the Performing Arts as part of their expansive initiatives honoring the centenary of JFK’s birth and to encourage the idea of creative citizenship.

Mr. Ma is also widely recognized for his strong commitment to educational programs that bring the world into the classroom and the classroom into the world. While touring, he takes time whenever possible to conduct master classes as well as more informal programs for students – musicians and non-musicians alike. He has also reached young audiences through appearances on “Arthur,” “Mister Rogers’ Neighborhood” and “Sesame Street.”

Mr. Ma’s discography of over 100 albums (including 18 Grammy Award winners) reflects his wide-ranging interests.  He has made several successful recordings that defy categorization, among them “Appalachia Waltz” and “Appalachian Journey” with Mark O’Connor and Edgar Meyer, and two Grammy-winning tributes to the music of Brazil, “Obrigado Brazil” and “Obrigado Brazil – Live in Concert.” Mr. Ma’s recent recordings include: “The Goat Rodeo Sessions,” with Edgar Meyer, Chris Thile and Stuart Duncan, which received the 2013 Grammy for Best Folk Album, and “Songs from the Arc of Life,” with pianist Kathryn Stott.  His most recent release, “Sing Me Home,” recorded with the Silk Road Ensemble, was released in April 2016 as the companion album to documentary film The Music of Strangers.  Created by Oscar-winning producer Morgan Neville, the film follows the Ensemble’s more than 50 musicians, composers, visual artists and storytellers as they explore the ways art can both preserve traditions and shape cultural evolution.  Mr. Ma remains one of the best-selling recording artists in the classical field.  All of his recent albums have quickly entered the Billboard chart of classical best sellers, remaining in the Top 15 for extended periods, often with as many as four titles simultaneously on the list.

Yo-Yo Ma was born in 1955 to Chinese parents living in Paris. He began to study the cello with his father at age four and soon came with his family to New York, where he spent most of his formative years. Later, his principal teacher was Leonard Rose at The Juilliard School. He has received numerous awards, among them the Avery Fisher Prize (1978), the National Medal of Arts (2001), and the Presidential Medal of Freedom (2010).  In 2011, Mr. Ma was recognized as a Kennedy Center Honoree. He is currently serving as a UN Messenger of Peace and as a member of the President’s Committee on the Arts & the Humanities.  Most recently, Mr. Ma has joined the Aspen Institute Board of Trustees.   He has performed for eight American presidents, most recently at the invitation of President Obama on the occasion of the 56th Inaugural Ceremony.

Mr. Ma and his wife have two children. He plays two instruments, a 1733 Montagnana cello from Venice and the 1712 Davidoff Stradivarius.

NEW SINGLE “A PRAYER FOR PEACE” FROM MUNICH BY

A GATHERING OF FRIENDS

With the all-new recording, A Gathering of Friends, John Williams and Yo-Yo Ma renew their celebrated, decades-long collaboration and friendship.   The album is comprised of two acclaimed concert works the composer wrote for the cellist, plus selections from his film scores for Schindler’s List, Lincoln, and Munich.  Featuring Williams himself conducting the New York Philharmonic, A Gathering of Friends also includes special appearances by the Spanish guitarist Pablo Sáinz-Villegas and harpist Jessica Zhou.

John Williams and Yo-Yo Ma first met some four decades ago, when the Oscar-winning composer became conductor of the Boston Pops Orchestra and Ma was just beginning his remarkable solo career. Their creative collaboration has extended from the concert hall to the scoring stage to the 2008 inauguration of President Barack Obama, all anchored by an abiding personal connection and mutual regard. From their first encounters, each recognized in the other an understanding that, as Williams simply puts it, “music is our oxygen.”

The centerpiece of A Gathering of Friends is the first recording of Williams’ newly revised version of his Cello Concerto, a work composed for Ma in 1994 and originally recorded for Sony Classical in 2001. As the four-movement concerto was performed over the last three decades, Williams made significant revisions to the score. Ma noted that the new version incorporates even “bigger changes, structural changes,” with a final movement that turns into “one glorious song, spinning and spinning, spinning to the very end.”

Also heard on A Gathering of Friends are new arrangements Williams created for Ma of three selections from his Oscar-winning score for Schindler’s List and a new arrangement for cello and strings of “With Malice Toward None” from his score for the 2012 film Lincoln. The album concludes with a duo arrangement for Ma and guitarist Pablo Sáinz-Villegas of “Prayer for Peace” from the 2005 film Munich. All three film scores are part of Williams’ enduring partnership with director Steven Spielberg.

The other concert work on A Gathering of Friends – Highwood’s Ghost – reaffirms the Williams-Ma friendship in the context of the Tanglewood Music Festival and in the spirit of the legendary composer/conductor Leonard Bernstein. Williams composed the work to celebrate the Bernstein centennial at Tanglewood in the summer of 2018, evoking the legend of a ghost said to haunt the Highwood Manor House on the Tanglewood grounds – a ghost that Bernstein memorably encountered. Williams wrote haunting solo roles for Ma and the Boston Symphony Orchestra’s principal harp, Jessica Zhou, who reunite for this recording with the New York Philharmonic.

A GATHERING OF FRIENDS 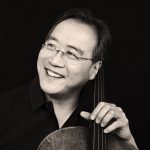 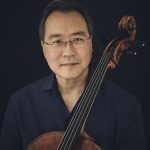 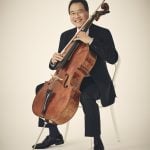