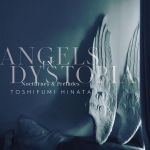 Part of an ongoing Toshifumi Hinata series focusing on the musician’s solo albums released from the mid-1980’s through the present, Toshifumi breaks down below, the stories behind some of the songs on the Angels in Dystopia Nocturnes & Preludes album:

“Fields of Flowers” and “Angels in Dystopia”

This is one of the first songs I composed for this album. The image of a town that has been destroyed beyond repair. “How could something like this be possible” I thought. I was originally going to title it “Sun Flowers” but I went with “Flowers” as I wanted it to be more universal, thinking not just of Ukraine, but also the many other battlefields. “Angels in Dystopia” is the overall image for the album

“Little Rascal on a Time Machine”

Many people sample my songs so in the beginning part, I decided to also try sampling my own song. I combined Mr. Nakanishi’s violin performance from 30 years ago and now. As if he’s coming and going from 30 years ago in a time machine.

The image of war and conflict like “Fields of Flowers.” I tried to express the feelings of the many young people today who have been listening to “Reflections” and the issues that they face, thinking about the environment and gender and how to best navigate and lead their lives in the current climate. This is something that applies to the entire album but I was thinking of those young people when I made this.

“So Near and Dear”

The feelings for those people that you are close with be it the friends that you hold dear in your life or your family, the feeling of caring for another person. Cellist Lisa Gray’s overdubbed herself to perform as a quintet and each melody line expresses the feelings of various people (of a different person).

I composed this song thinking of the snowy landscape from a memory from my past. Minnesota, where I lived, is known for its many lakes, but the snow is very deep and lakes freeze over in the winter and become natural skating rinks. That’s the scene. You can also see the aurora, the northern lights.

The path that leads to a country in an unknown location. There is a sign on an unnamed road… something like that… For some reason a lot of my songs end up being waltz-like (laughs). It just happens naturally, though. I like ballet and I often incorporate images from modern ballet and contemporary dance when I write songs.

“Lost in the Tide”

This song was inspired by photos my father left me from when he was living in Shanghai around 1940. In one of the photos there was a Chinese woman who appeared to be my father’s lover and his feelings for her were written on in it in English. I was surprised as I realized that my father, too, had his own life. I wrote this song, starting from what kind of life I imagined the woman lead after separating from my father. Shanghai was an economic hub. But people’s lives changed when the war started… Even today, this is something that recurs, for every era and every generation.”

The concept, of course is violence and kindness. While the title is the name of a flower, the motif is the same as Angels in Dystopia. The marigold symbolizes “unconditional love” and “compassion” – it also has a bit of a sacred mood. Or perhaps I should call it a “prayer.”

There is a bookstore called Shakespeare & Company in Paris. In the 1920’s, there was a woman named Sylvia Beach, who was the first publisher of James Joyce’s Ulysses, which is considered a masterpiece today but no one else was willing to publish at the time. Shakespeare & Company was her bookstore. By running a bookstore, she created a gathering place for many artists. The likes of Hemingway, André Gide, Paul Valéry, Leduc, Gertrude Stein, Man Ray, and many more would gather here; it was just like the world of Woody Allen’s Midnight in Paris. She had a female lover. This was the era of the so-called “lost generation.” I created this song with the image of a little decadence, imagining the happenings of that time period. The store closed later due to the war but a man named George Whitman revived it in 1980. His daughter, who is now the owner is also named Sylvia. And so I added the name “Sylvia” to the title. It is a bookstore that I can’t help visit whenever I’m in Paris.

“Maurice at the Beach”

This song is inspired by Maurice Ravel, imagining him standing at the beach in full dress deep in thought. Ravel is an idol of mine as contrary to what you’d imagine from the epicness of his music, it seems he was rather short, standing at only 160cm (5’3”). I enjoy reading biographies and Tchaikovsky was an avid diarist and I enjoyed reading those as well. One day he wrote “today I thought of an unbelievably awesome melody! – but he never touches on it again. It may be something that many of the great composers experienced often.”

This song was inspired by a photo of a rose in the garden of Léonard Tsuguhara Foujita’s house in the outskirts of Paris taken by photographer Hiroyuki Ohta. I rewrote a song I had written a long time before when I found out recently that Mr. Ohta passed away several years ago. I wish we could have met and spoken one more time.

Composed and performed by Toshifumi Hinata

Recorded and mixed by 3 Parkers Inc.

Toshifumi Hinata was born in Tokyo on February 23, 1955. After graduating from high school in 1973 he spent some time working at a motorcycle company in Farnham in Surrey, England before enrolling in Northland College in Ashland, Wisconsin in 1975 and then transferred to Berkley College of Music in 1976. In August of 1978 he was the recipient of an international student scholarship from the University of Minnesota, Duluth and transferred to the Department of Music at UMD.

Over the next four years he majored in classical piano and studied theory, composition and orchestration and performed in recitals as an accompanist in songs and for soloists as well as chamber music and orchestra. In 1982 following his graduation he started working as a musician in Minnesota. In 1983, he returned to Japan and built STUDIO AVR and established AVR Corporation with his brother Daisuke who was working as a musician in Los Angeles. In 1985 he released his first solo album Sara’s Crime under Alfa Records. He followed this up with his second album Chat D’Ete and third Reality In Love in 1986. In 1987 he released his fourth album Story and in 1988 released his first piano solo album Isis.

He has continued to consistently release solo albums. His most well-known song is perhaps “Reflections” from his 1986 record Reality in Love which has amassed 70M+ streams across platforms. It was also used in the 2020 Netflix film Tigertail as well as in the pilot of Amazon Prime’s 2018 series Forever along with his track “Menuet” from the same record. His track “Ode to the Unknown” was also used the in 2005 film Pavee Lackeen: The Traveller Girl. Toshifumi most recently co-produced “Weekend” with rapper Ombachi for Amazon’s 2022 film Emergency starring Sabrina Carpenter.