Latest Release : Christmas In The City 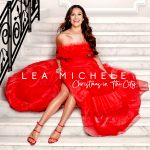 Christmas time is known for bringing joy and glee — ... END_OF_DOCUMENT_TOKEN_TO_BE_REPLACED

An early holiday gift – Lea Michele will officially be ... END_OF_DOCUMENT_TOKEN_TO_BE_REPLACED

– Acclaimed actress, singer and author LEA MICHELE will release her first-ever holiday album, Christmas in The City, on October 25th via Sony Music Masterworks. Inspired by her fond memories of growing up in New York City, Lea has captured the unique magic of the city’s holiday spirit throughout the 11- track collection, which is available now for preorder. Officially kicking off the holiday season, Lea debuts “It’s the Most Wonderful Time of the Year,” giving fans an early taste of the album and showcasing her imitable style – listen here. “This album is something I’ve wanted to do for such a long time,” says LEA MICHELE of Christmas in The City. “Christmas is my favorite holiday and it has always been such a special time with my family. I always go back home and spend Christmas in New York, so when I think of the holidays I think of the city. This album is really a celebration of that magic and spirit of my hometown. I am so excited to share the songs I grew up with and I hope it brings listeners a lot of joy this season!” Christmas in The City reunites Lea with songwriter and producer Adam Anders, as the two return for their first collaborative project since working together on Glee. The album features timeless hits like “Have Yourself a Merry Little Christmas,” “Silent Night,” “Rockin’ Around the Christmas Tree” and more, as well as “Christmas in New York,” a new original co-written by Lea and Adam that is sure to become an instant classic. With star-studded collaborators handpicked by Lea, including fellow Glee alum Darren Criss, Spring Awakening costar Jonathan Groff and Broadway favorite Cynthia Erivo, Christmas in The City delivers the spirit of the holidays in true New York style. LEA MICHELE – CHRISTMAS IN THE CITY TRACKLISTING 1. It’s the Most Wonderful Time of the Year 2. Have Yourself a Merry Little Christmas 3. Christmas in New York 4. I’ll Be Home for Christmas (feat. Jonathan Groff) 5. Do You Want To Build a Snowman? 6. Rockin’ Around the Christmas Tree 7. Silent Night 8. White Christmas (feat. Darren Criss) 9. Silver Bells 10. Angels We Have Heard on High (feat. Cynthia Erivo) 11. O Holy Night ABOUT LEA MICHELE Since making her Broadway debut at just eight years old in Les Misérables, Lea Michele has continued to be a powerhouse on both stage and screen as well as a chart-topping solo artist and New York Times bestselling author. Following her critically acclaimed performance as “Wendla” in the Tony Award-winning Broadway production of Spring Awakening, she made her television debut as perfectionist firecracker “Rachel Berry” on Ryan Murphy’s critically acclaimed, award-winning musical series Glee. The breakout role earned the actress both a Teen’s Choice Award and People’s Choice Award, as well as Emmy and Golden Globe nominations. Lea’s love for music has always been a focus point in her career, signing to Columbia Records and making her solo album debut with 2014’s Louder, which notched a Top 5 position on the Billboard 200 chart upon its release. Lea added best-selling author to her resume that same year, releasing her first book entitled “Brunette Ambition,” which quickly became a New York Times Best Seller. She released her second book, “You First,” the following year. In 2017, she released her sophomore album Places and hit the road for a series of sold-out North American tour dates as well as a coheadlining slot on the LM/DC Tour alongside fellow Glee alum Darren Criss. CONNECT WITH LEA MICHELE: FACEBOOK | INSTAGRAM | TWITTER | YOUTUBE APPROVED PRESS PHOTO: DOWNLOAD (CREDIT YU TSAI) Sony Music Masterworks comprises Masterworks, Sony Classical, Milan Records, OKeh, Portrait and Masterworks Broadway imprints. For email updates and information please visit www.sonymusicmasterworks.com/