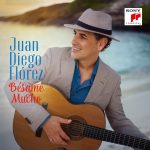 Juan Diego Flórez – Bésame Mucho New Album Out September 21, 2018 On Sony Classical His passion for Latin American music started at an early age, when he was still a child. It was a deep and lasting passion and his initial encounter with it turned into a lifelong passion. “I grew up with vals […]
Read More

His grandmother played tangos on the piano and his father Rubén is a folk singer famous in Peru who has a great deal of love for the great Chabuca Granda, who achieved her success with classics like “José Antonio”. But songs from Cuba and Mexico, especially those by José Alfredo Jiménez, and from other Latin American countries also fascinated Floréz from an early age. “This music goes straight to the heart,” he confesses, “because it deals with things that affect us all directly, such as home, family, the joy of love and the pain of love.”

With his new album, Floréz wants to convey a representative image of the Latin American continent in 18 stages using “songs that are all exemplary of the people and their various countries.” The musical journey includes the Venezuelan “Caballo viejo” as well as music from Colombia and the Argentine protest song “Sólo le pido a Dios”. There’s also “Aquarela do Brasil” from Brazil and finally classics like “Guantanamera” from “our Cuban brothers, the kings of rhythm”, as Floréz puts it.

The 20 musicians who accompany the tenorissimo on this tour play instruments that are characteristic of the countries from which the music originates: the cavaquinho, the little sister of the guitar, which originally comes from Portugal; the bandoneon, which was invented in Germany and is nowadays closely linked to Argentine music; and the maracas from Venezuela or the pandeiro, a small hand drum with clamps that is firmly anchored in Brazilian tradition.

This album is certainly Flórez’ most personal one so far. His repertoire focuses on bel canto operas, in particular the operas of Gioacchino Rossini, and select French stage pieces. Most recently, he proved his versatility with a critically acclaimed Mozart album, even though Flórez had never sung any of the Mozart pieces on stage before then. With his sleek, smooth voice and his confidence when it comes to high notes and style, Juan Diego Floréz has proven for many years his exceptional position as one of the best tenors of our time.

Even before the start of his global career, he worked with pop and rock music and just as intensively with Peruvian folk music. He sang in his school’s choir, wrote his own songs and performed them in cafés and piano bars in Lima. At the age of ten, he learned to play the guitar. To this day, it is his loyal travel companion, especially when he starts to pluck the strings at the end of his solo recitals.

Flórez can also be experienced as an arranger on this CD. He put together the tracks “Amanecí entre tus brazos” and “La malagueña” himself, wonderful sequels to an early and deep passion for Latin American music that needs to be rediscovered again and again. “This music is as strong as a first love,” admits Juan Diego Floréz candidly…