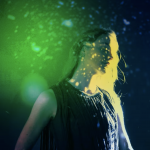 The Icelandic composer grew up in a town of 800 people in the rough and sparsely populated northern half of Iceland, in a music-obsessed household where Led Zeppelin and Tchaikovsky took turns on her parents’ record player. “As soon as I could stand, I was wandering over to the piano, wanting to play,” she remembers. “I started piano lessons aged six, then wrote my first piece of music aged seven, inspired by a storm outside.” By thirteen, she’d recorded a DIY album between classes at school, which she sold door-to-door in aid of a children’s charity. A place at Reykjavik’s Hamrahlíð College beckoned, where she would go on to sing in the world-renowned choir whose former choristers include Björk and members of Sigur Rós. Evensen’s path seemed clear: she would apply to the conservatory in Vienna, and become a concert pianist.

The further she wandered down that path, however, the more something within her felt uncertain about it all. It threw her into turmoil. What do you do when the thing you’ve strived for all your life is suddenly within reaching distance, but you’re uncertain it’s what you want after all? “I was feeling lost,” Evensen remembers. “I’d lost a certain spark, and my desire to practice every single day for a few hours. I didn’t know what to do.”

Evensen decided to listen to her intuition. She placed her application forms for Vienna to one side, and opted to see the world instead, falling simultaneously into a glittering modelling career. Spells were spent living in London and New York. Wherever she went, “music never left me,” the composer insists. “Whatever city I was in, I would find a piano. I needed to. Music has always helped me organise and understand how I’m feeling and release something that maybe I’ve been carrying within.”

EVENSEN, who was recently selected by The Line Of Best Fit as one of their ‘Artists On The Rise 2021’, hails from the remote town of Blönduós in the north of Iceland. Drawn to music from an early age, she began studying the piano aged six and wrote her first piece of music as a seven-year-old. Having abandoned her plans to become a professional classical pianist, however, EVENSEN instead moved to London and New York, where she worked in various jobs while focussing on developing her language as a composer. She returned to Iceland in 2020 to record her debut album, BYLUR, which is slated for release by XXIM this spring.

Of signing to the label, EVENSEN says, “I’m incredibly excited and grateful to have the opportunity to release my very first album on the new imprint, and to be working alongside such a wonderful international team.”

EVENSEN’s manager, Nick Knowles of KxKn Management, added “we look forward to beginning this journey with the incredible team at XXIM Records and Sony in bringing Eydís’ music to a worldwide audience.”

Alexander Buhr, SVP of International A&R at Sony Masterworks, comments, “Eydís is a hugely promising artist with a remarkable flair for both music and visuals. We are very excited to introduce her to the world, and to have ‘BROTIN’ set the tone for our new label.”

‘BROTIN’ – which means ‘broken’ in Icelandic – is EVENSEN’s first glimpse into her musical universe, and it’s a deeply felt instrumental piece for piano written, she confides, at a time of singular personal vulnerability. The song is accompanied by a music video created by EVENSEN and acclaimed Icelandic photographer Anna Maggý.

“BROTIN represents my most vulnerable emotional state,” EVENSEN explains. “My good friend Anna and I developed the concept for the video in relation to the feelings that ‘BROTIN‘ reflects: isolation, a sense of being emotionally overwhelmed, and of essentially being broken.” Maggý says, “It felt surreal shooting this music video during the darkest, roughest and coldest hours of wintertime in Iceland, and this added to the suffocating solitude.”

Preview the Video for Brotin here

‘BROTIN’ was the final piece EVENSEN composed for her debut album BYLUR, which was recorded and produced at Reykjavík’s Greenhouse Studios by its co-founder, composer Valgeir Sigurðsson, who has also worked with a varied array of artists, including Björk, Nico Muhly and Ben Frost. The album takes its name from the Icelandic word for ‘snowstorm’, and is reflective of both the impact that the nature and weather had upon her as a child growing up in her homeland’s remote, northern region, and of the emotional turbulence she went through in her years of travel. “All of the pieces represent moments from my life,” EVENSEN concludes. “So many ups and downs: all of my joy, darkness, happiness, heartbreak and melancholia.”

Further details about BYLUR will be revealed soon.